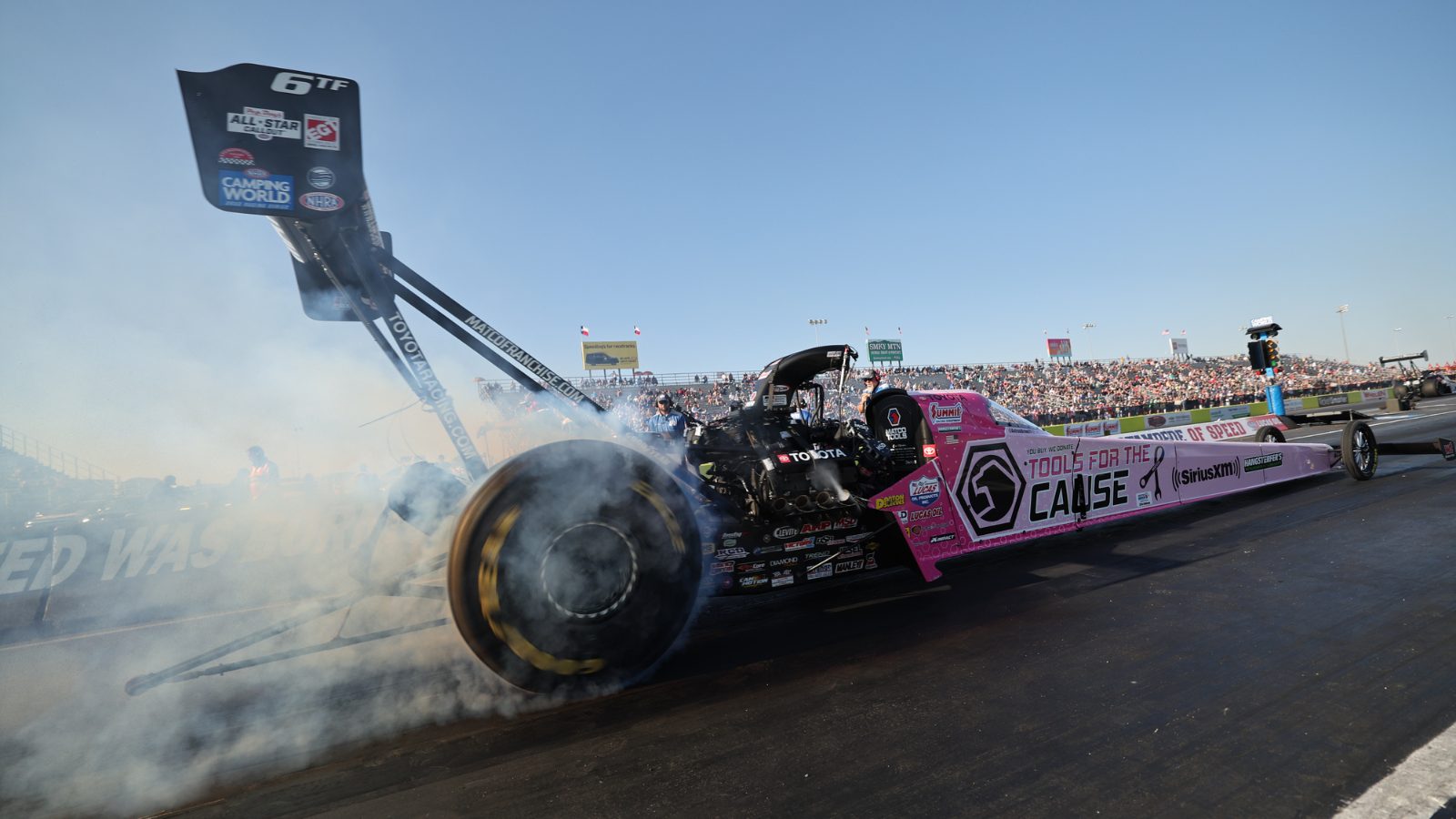 Three-time Top Fuel world champion Antron Brown came up just eight-thousandths of a second short from reaching his second final round of the NHRA Countdown to the Championship Sunday night at the Texas NHRA FallNationals at the Texas Motorplex. Brown in his bright pink Matco ‘Tools for the Cause’ dragster lost a side-by-side race to Austin Prock in the semifinals at the fourth race of the playoffs. Another late-round finish combined with early exits by other championship contenders allowed Brown to move up from fifth to third in points.

Brown made four sub-3.70-second passes throughout the weekend, including his 3.693 E.T. at 331.93-mph in the second qualifying session that put the AB Motorsports owner and driver in the No. 4 spot going into Sunday’s rain-delayed eliminations.

Brown kicked off eliminations with a 3.684 E.T. at 330.54-mph to eliminate former teammate Tony Schumacher and his 3.715-second effort. Later in the round, Mike Salinas and Steve Torrence lost, allowing Brown to pass Salinas and close in on Torrence. A 3.699-second pass followed in the second round, which knocked out Texas native Spencer Massey and his 3.879 while allowing Brown to pass Torrence in the process.

The semifinal pairing between Brown and Prock was one of the closest races of the day. Both drivers left the starting line with .045 reaction times and stayed together all the way down the 1,000-foot racetrack. Prock was ahead by just thousandths at the finish line, though, with his 3.681 beating Brown’s 3.689-second effort.

“It was a close race in the semis; we were pushing, but it was a great drag race,” said Brown, a three-time winner this season. “This is how tight this field is right now, it can go either way no matter who you race. Our team has some really good momentum going. We’ve got two races left and the championship is still right there in front of us so we’re just going to keep pushing.”

Including this weekend, Brown and the Matco ‘Tools for the Cause’ team have reached the semifinals or better at four of the last five races. That means Brown is carrying serious momentum into the next race of the Countdown, the NHRA Nevada Nationals in Las Vegas. He’ll enter the race third in points behind Brittany Force and points leader Justin Ashley.

“We always race well in Vegas and we’re looking forward to getting back there and seeing what we can do,” said Brown, who’s pursuing his fourth world championship as a driver and the first as a team owner. “We’ll take it one round at a time, and just keep ourselves right there in the hunt. It’s points-and-a-half in Pomona so the championship is up for grabs, and man, it’s just one of those ‘wouda, coulda, shoulda’ deals today, but eight-thou, that is just one of those good side-by-side races so we can’t hang our heads over that. Wish we were racing in Vegas next week.”

The NHRA Nevada Nationals, Oct. 28-30 at The Strip at Las Vegas Motor Speedway will be the third and final race where Brown will campaign the special ‘Tools for the Cause’ livery. This October paint scheme helps to support Matco’s ‘Tools for the Cause’ initiative with the Breast Cancer Research Foundation (BCRF).