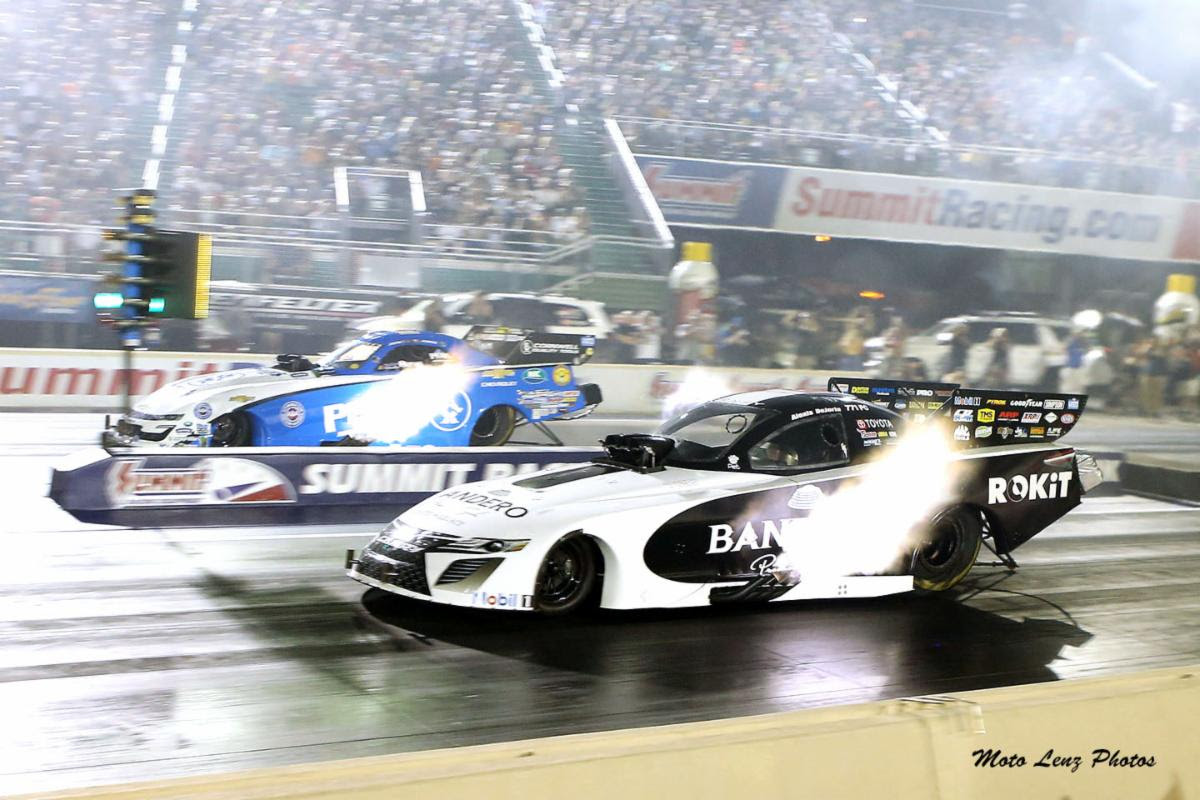 After a year of planning, a production full of pomp and circumstance was presented to a packed house at the 45th Annual Cornwell Tools Night Under Fire on Aug. 6, 2022 at Summit Motorsports Park in Norwalk, Ohio.

Guests from across the country and Canada gathered, despite the heat and humidity, to see a wide variety of entertainers and racers give it everything they had to put on a show for them. Their stage was the track perfectly prepared by Summit Motorsports Park Track Manager Evan Bader, Kurt Johnson of Total Venue Concepts and a hardworking track crew. Ron Huntley and Summit Motorsports Park president Bill Bader Jr. called all of the amazing action.

As part of opening ceremonies, entertainers and racers paraded down track while being introduced by Bader Jr., who sported a tuxedo for this very special occasion. The Rhythm and Rhyme Barbershop Quartet performed “The Star-Spangled Banner,” and a giant flag was ceremoniously unfurled over the track surface by a team of people led by Bobbie Bader.

Bob Motz, who has been a fan-favorite at America’s Racetrack for decades, put on a show in his daunting jet engine-powered truck, and Joe Sylvester recorded 101.84 mph in his Bad Habit Monster Truck to set a Guinness World Record for the first Monster Truck to record 101 mph.

The competition was eye-catching and commanding. In Funny Car, Alexis DeJoria drove to a 3.92 to defeat John Force, who was right there with a 3.93, and in Pingel Top Fuel Motorcycle Shootout presented by CycleDrag, Larry “Spiderman” McBride rocketed to a 5.77 to claim victory over Dave Vantine, who was not far behind with a 5.97. Both riders went into the sand at the end of the track, but thankfully, neither was injured.

Josh Graham gunned to a 5.39 to win the ebay motors North American Jet Car Championship after Ernie Bogue turned on the red light.

In Top Alcohol Dragster, Corey Michalek motored to the win with a 5.39 over Mike Hepp and his 5.66, and in R&R Auto Body and DeCerbo Construction Rumble Wars Extreme 8 Pro Mod, Johnny Camp cruised to a 3.66 against James Beadling, who was forced to lift. 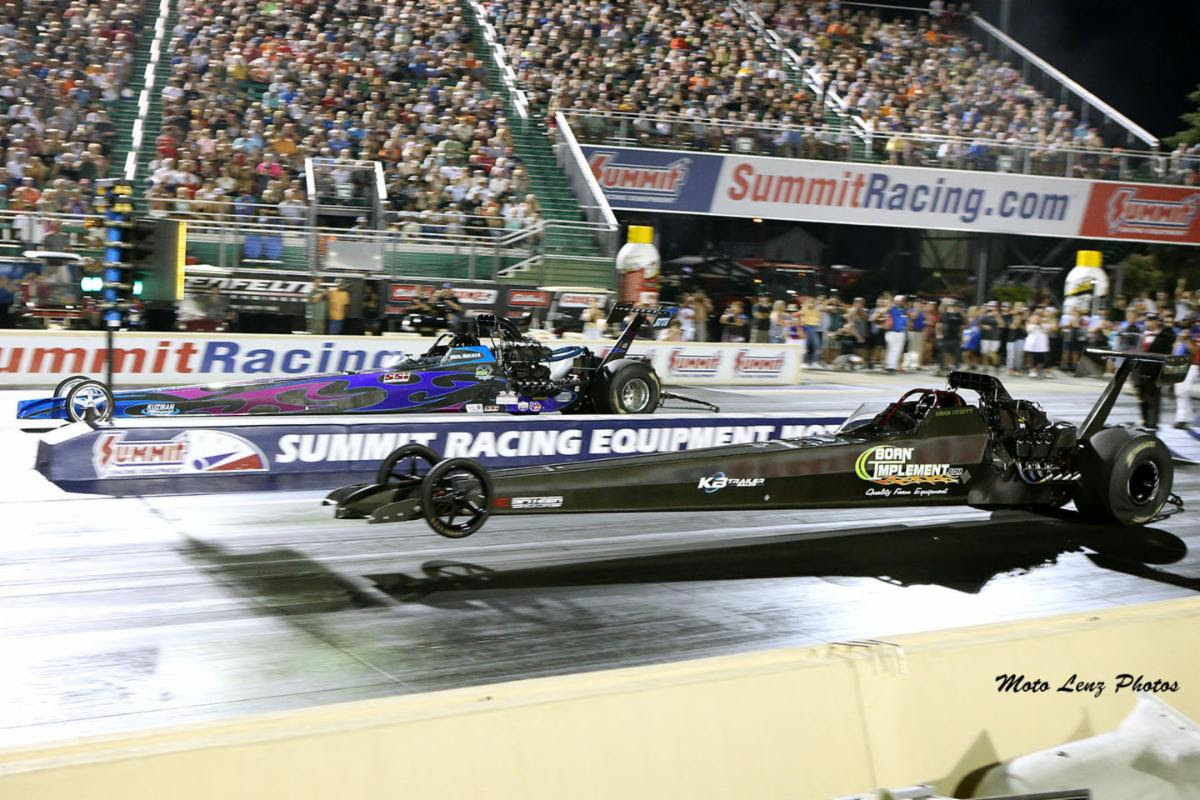 Mike Knott muscled to the win with a 3.73 when Paul Molnar had to get out of the throttle in KB Trailer Sales/Motorsports Unlimited Outlaw Dragster, and Ray Kasicki and Bob Cook both stopped the clocks at 5.62, but Kasicki took the holeshot win, in ScottRods AA/Gassers.

The Edelbrock Super Series Elite presented by American Race Cars and Lucas Oil was introduced at this year’s event, and as part of it, the top 32 racers in Summit Motorsports Park’s Edelbrock Super Pro, Edelbrock Pro and Edelbrock Sportsman Delivered on Time by TFC Transportation categories, and the top 16 racers in the Wiseco/Cycle Tech Super Bike category as of Aug. 1, earned the opportunity to race for a share of a substantial $75,000 purse. Carl Keil won over Jono Gerber in Edelbrock Super Pro, Jon Lowery defeated John Bailey in Edelbrock Pro, Garreth Sheppeard upset Blue Adams in Wiseco/Cycle Tech Super Bike and Mitch Williams went to the winner’s circle after facing A.J. Buchanan in Edelbrock Sportsman Delivered on Time by TFC Transportation.

The Summit Racing Equipment Junior Dragster Shootout put the spotlight on the top eight Bear Motorsports presented by Wiseco Junior Dragster Advanced, Intermediate and Novice racers as of Aug. 1, and the guaranteed purse was a generous $5,760. Braden Peters got past Cruz Schafter in Advanced, Vince Tiburzi turned on the win light against Kace Shupp in Intermediate and Brayden Baehr defeated sister Abigail Baehr in Novice.

Toward the end of the evening, Bader Jr. gave a heartfelt speech in memory of his father, Bill Bader Sr., who was on the minds of most at this event and had played an integral part in producing it for decades. Then as Bader Sr. would have wanted, a powerful pyrotechnics show, shot from multiple locations over the park, put the exclamation mark on this year’s incredible and inspiring running of the Cornwell Tools Night Under Fire.