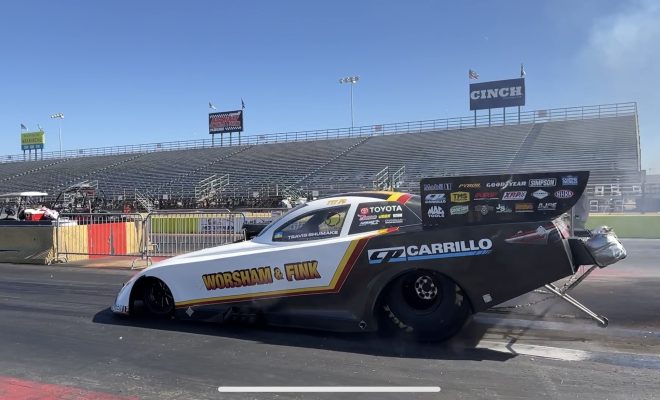 Under the direction of two-time NHRA world champion driver and crew chief Del Worsham, Shumake made several passes to begin the process of earning his professional Funny Car license. On his final run of the day the unsponsored driver made a full pass under power in 4.009 seconds at 319.62 mph. Once he has completed the process, he will become the first openly gay professional drag racer in the sports history. The New York City resident will be eligible to race at any NHRA sanctioned track or enter any NHRA national event behind the wheel of the fastest full-bodied race car on the planet, an 11,000- horsepower Funny Car.

“My goal was to have this license in my hand at the end of the day, but I don’t view this as a major setback. I crossed the centerline, disqualifying a critical pass and we just ran out of time at the end of the day,” said Shumake. “I am happy with the progress I made today with this phenomenal team. I am hoping to bring a few prospective sponsors to final races of the season so if anything, they’ll have the chance to watch me in action if I can get back in the seat to finish the final pass I need for my license in Vegas or Pomona.”

Travis’ father, Tripp, began drag racing in the late 1960s, but became a national star in the late 1970s and early 1980s driving one of Johnny Loper’s Funny Cars. He earned a spot in the Cragar Five-Second Club and the Crane Cams Funny Car 250-mph Club. Tripp appeared in three Funny Car finals and won two, at the 1981 Southern Nationals in Atlanta and the 1982 World Finals in Orange County, California. At the end of the day the younger Shumake reflected on what his late father would have thought of his effort.

“My dad would have been mad that I hit those blocks and damaged the body,” said Shumake. “He would have told me to get off the throttle quicker. My dad was also known for holding the throttle down and he was on fire a lot.  Tripp Shumake was always on fire, and it was because he never let go of the throttle on race day. Perhaps my enthusiastic drive into the other lane was a genetic thing. Hopefully I impressed him with my consistent reaction times throughout the day.” 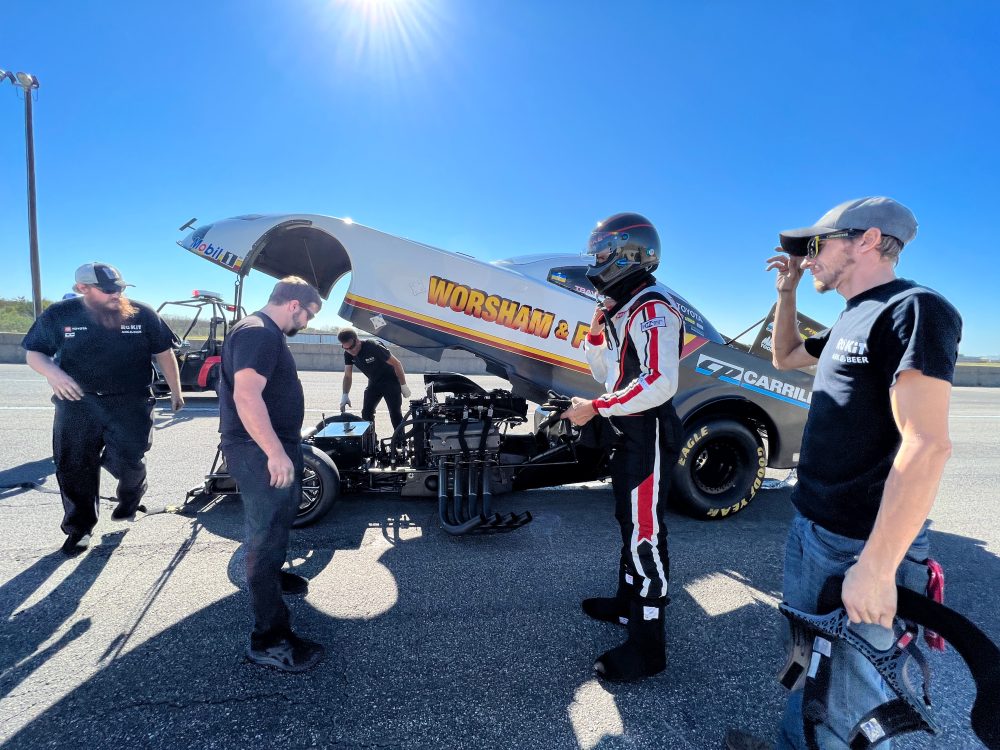 In addition to his father’s significant drag racing career Shumake’s mother, Susie, was a staple on the circuit and was recently inducted into the Arizona Drag Racing Hall of Fame in 2018. Throughout his life Shumake has always felt the pull to get behind the wheel and compete at the highest level like his father. Making a strong run in his final pass was also satisfying for Shumake.

“The milestone of surpassing my dad’s career top speed was big to me. His fastest speed was 285 mph which he ran here at the Texas Motorplex,” said Shumake. “To run over 319 mph with him onboard got me really choked up. Inside the racecar we affixed a button with a picture of my dad that 16-time Funny Car world champion John Force wore the race after my dad died. My dad had never gone 300 mph so John took him with him on a run to break that barrier. I used that same button today to go 319 mph. I am excited for what is to come in Las Vegas at the end of the month. I am determined to finish up this chapter of the story and get my license in preparation for next season.”

Drag racing has a long history of being a leader in diversity with female, African American, and Hispanic world champions.

“Today is National Coming Out Day. Exceeding the speed of fellow LGBTQ+ drivers and legends in F1, IndyCar, and NASCAR was especially exciting given the positive moment we have seen for gay athletes in sports this year. I’m sure there are plenty of drivers out there who feel restrained to pursue their passion for motorsports because these waters haven’t been tested. 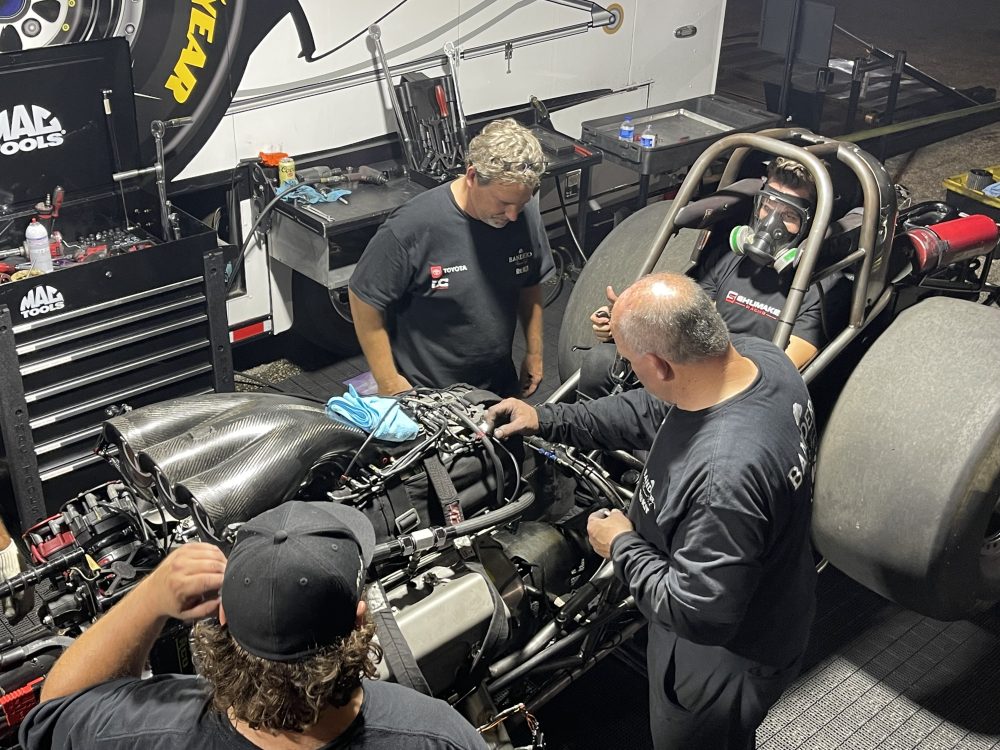 “I can’t do it without funding. That’s the biggest piece of the puzzle I need to solve. Corporate support of the LGBTQ+ community should be represented on the racetrack as well. Bringing new fans and sponsors to the fastest growing motorsport in the world is a win-win for everyone involved. Now is the time to show the world there is a place for gay competitors and fans in motorsports,” Shumake said.

Shumake continues to meet with prospective sponsors to help secure seat time and pin down a championship caliber team. The goal is to finalize immediate sponsorship opportunities, finish the nitro Funny Car license, and make his professional debut during the 2022 NHRA Camping World Drag Racing Series.