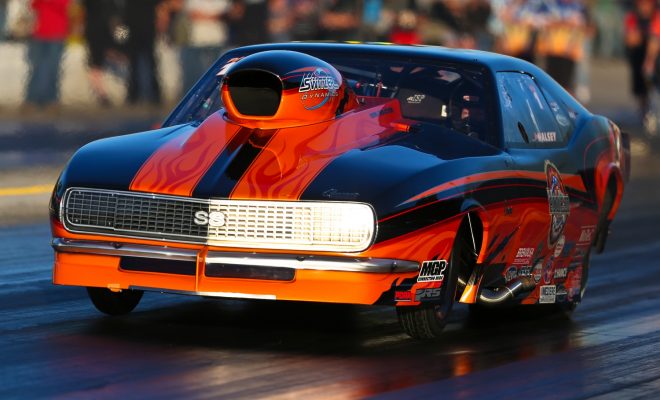 After two of three qualifying sessions, Kentucky’s own Hunter Davis is the provisional low qualifier in Coolshirt Systems Pro Jr. Dragster with a 7.900 in his ’20 Halfscale dragster. A near-perfect .001 reaction time puts Ralphie Stellato at the top of the Classic Graphix Top Jr. Dragster qualifying order in his Ohio-based ’10 Halfscale entry. 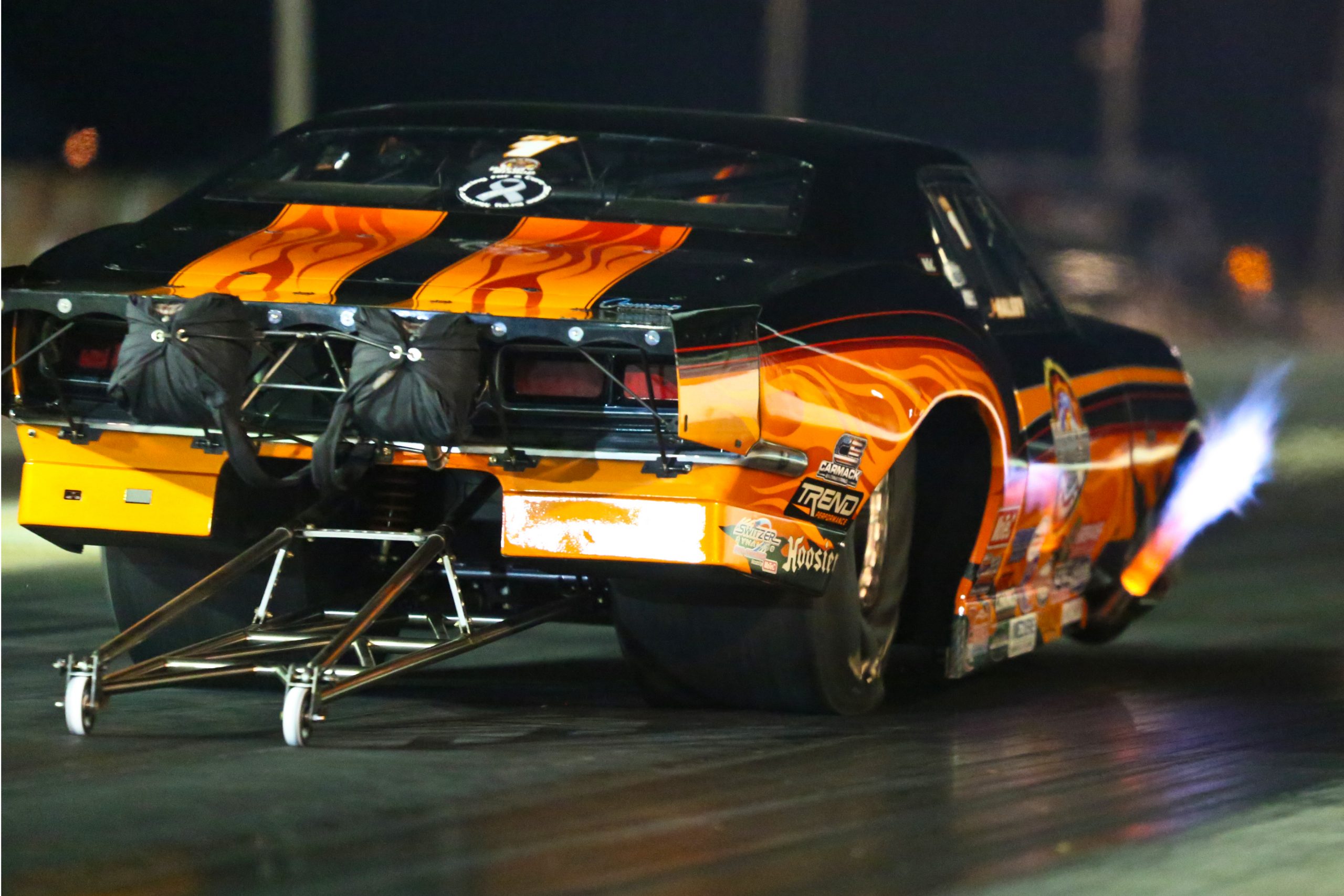 Like most of the other Pro Nitrous competitors, Jim Halsey wasn’t able to get down the track during the first qualifying session. But when the air cooled off and the track tightened up, Halsey’s Brandon Switzer-tuned “Daddy Shark” ’68 Camaro came alive, laying down a 3.651 at 208.01 to take the No. 1 spot.

“We struggled a little bit with the racetrack on the first run, but that’s to be expected with all the rain we got here yesterday,” said Halsey, who thanked Switzer and his crew, Eric Davis, Michael McMillan and Cathy Crouse. “We were pretty happy to run what we did on the second run. We made two good runs. We ran a .69 earlier in the heat and the .65 there. We feel pretty good going into Saturday.”

Perennial favorite Jay Cox led the field after the first qualifying session in his Buck-powered Butner Construction “Pumpkin” ’69 Camaro before slipping to second with a 3.674 at 205.91. Tony Wilson earned the No. 3 spot with his career-best 3.692 at 203.52 in the Justin Elkes-tuned, Musi-powered “Midnight Special” ’69 Camaro. 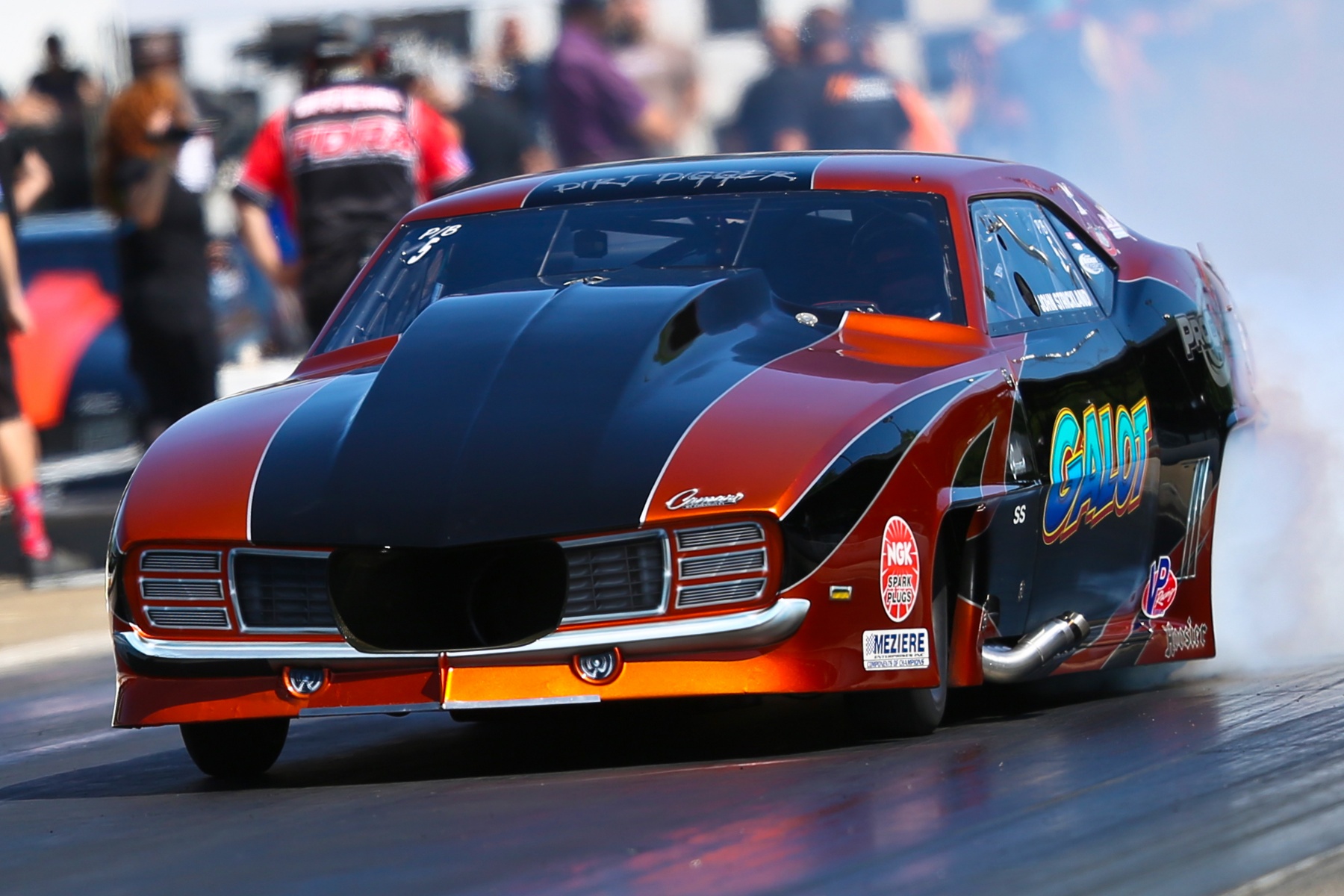 Two-time Pro Boost world champion Kevin Rivenbark laid down the quickest pass of the season so far – a 3.628 at 209.52 – to put one of two ProCharger-boosted GALOT Motorsports ’69 Camaros in the No. 1 slot going into race day. Rivenbark was one of nine entries in the 20-car qualifying order to dip into the 3.60-second range.

“When it left, I knew it was on a pass,” said Rivenbark, who thanked team owner Earl Wells. “It just felt good. The pass before, it went a .67 but it rattled a little bit. I knew when the track came around tonight, and Jamie [Miller] touched it up a little bit, it was going to run.”

Randy Weatherford in the WS Construction ’17 Camaro was the No. 1 qualifier going into the final session and held the spot until Rivenbark beat his 3.644 at 209.62, which held up for the No. 2 spot. Jason Lee piloted Eric Gustafson’s ProCharged Coast Packing Co. ’69 Camaro to a 3.65 at 208.26 to qualify third. 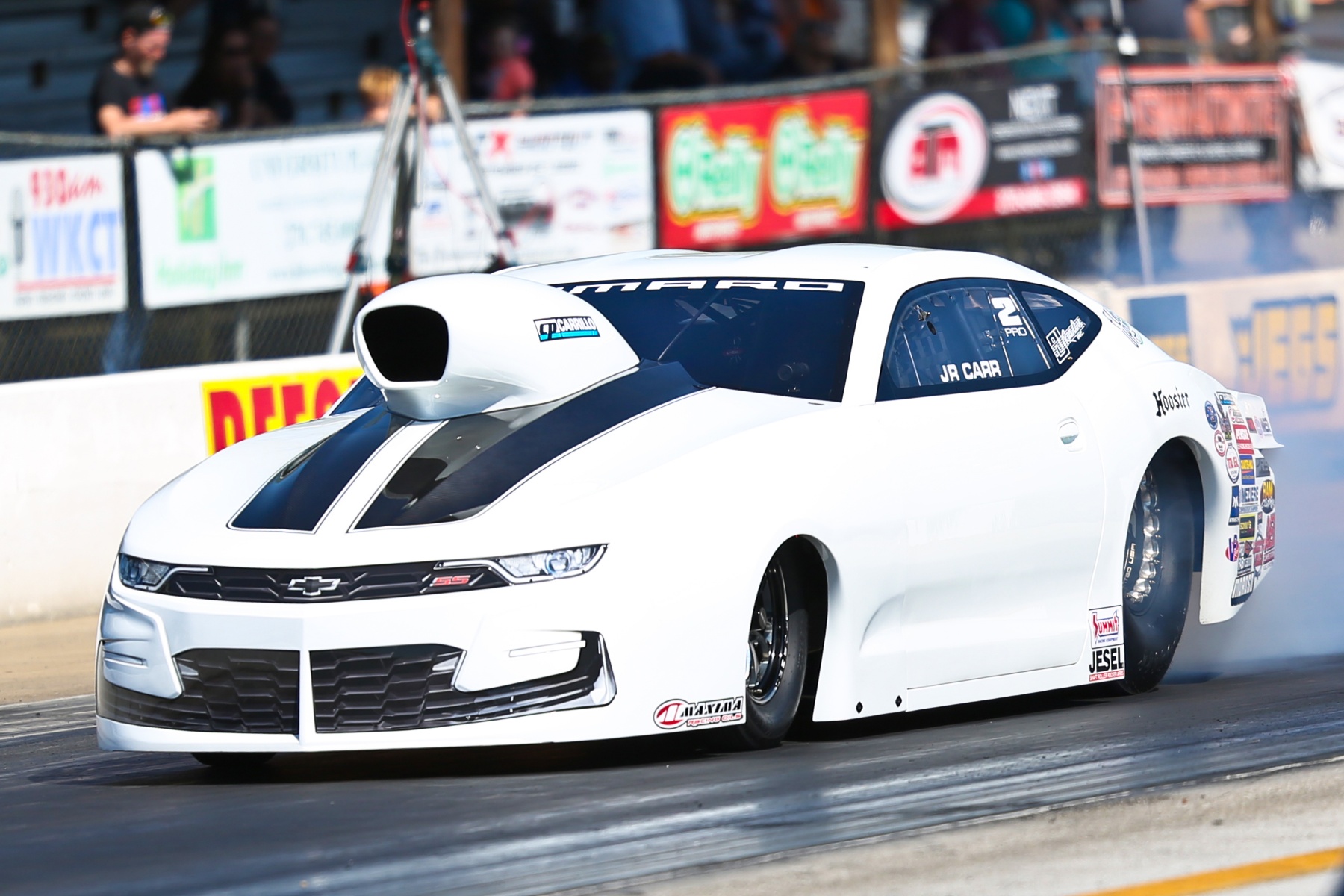 A 4.048 carried JR Carr to the No. 1 spot in Extreme Pro Stock at the season-opening East Coast Nationals, and a slightly quicker 4.043 at 180.77 did it again at Bowling Green. Carr and tuner Frank Gugliotta stepped up for the final qualifying session, jumping to the top of the qualifying order in the final pair.

“It’s a lot of pressure [to perform], especially when the car is there,” Carr said, thanking sponsors CP Carrillo, Liberty’s Gears, Maxima Oils, Fuel Up Cafe, Race Ugly Speed Shop, Ram Clutches, and RJ Race Cars. “There’s no excuses. Last race I didn’t do a very good job. Starting out here, I didn’t do the best job the first round of qualifying, but I didn’t lose my confidence or get upset. I just regrouped and it all came together. We’re really, really happy.”

Third-generation Mountain Motor Pro Stock wheelman Justin Kirk, driving for the Buck brothers, steered the “Big Daddy Warlock” ’05 Cavalier to a 4.071 at 176.63 to qualify second. Chris Powers, who won the season opener in his Sonny’s-powered ’14 Camaro, ended up third with a 4.075 at 174.12. 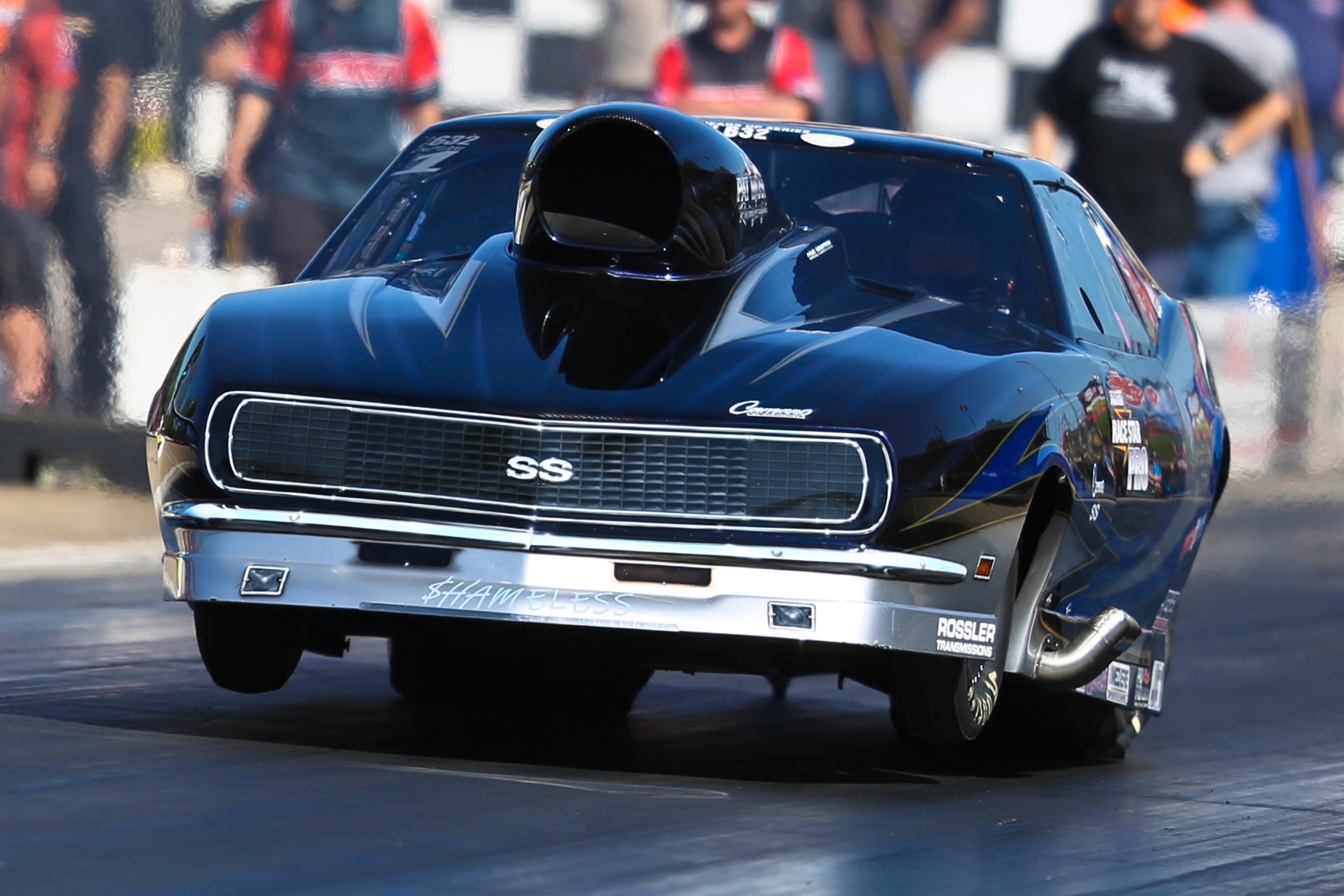 Defending Pro Outlaw 632 world champion Wes Distefano made a statement to close out the final qualifying session, recording a 4.105 at 174.59 on a single pass. The pass in his Musi-powered $hameless Racing/Race Star Wheels ’68 Camaro gave Distefano the No. 1 spot and the first part of a new class E.T. record.

“It pulled the wheels pretty good and it felt like it was moving just a little bit, but nothing where it was getting too far out of the groove,” Distefano said. “I didn’t realize how good of a run it was until I saw the .10 on the board.”

Distefano will need to run a 4.146 or quicker during Saturday eliminations to back up the run as a new record.

“We’re pretty motivated by [the record], but our main deal is we want to win the event,” Distefano said. “I need to be consistent on the line. We know on race day anything can happen. We’ve got a lot of work we need to do tonight to make sure we’re prepared for tomorrow. I think we have a real good chance. We’ll see where all the cards fall and how we do. But we’re feeling pretty good. If we could start eliminations right now, we’d be ready.”

Jimmy Pelcarsky, who won the season opener in his small-block-powered $hameless Racing ’15 Camaro, filed in behind Distefano with a 4.149 at 171.40. Florida’s Chris Holdorf qualified third in his Nelson-powered Dewitt Custom Concrete ’53 Corvette, running a 4.237 at 166.72.