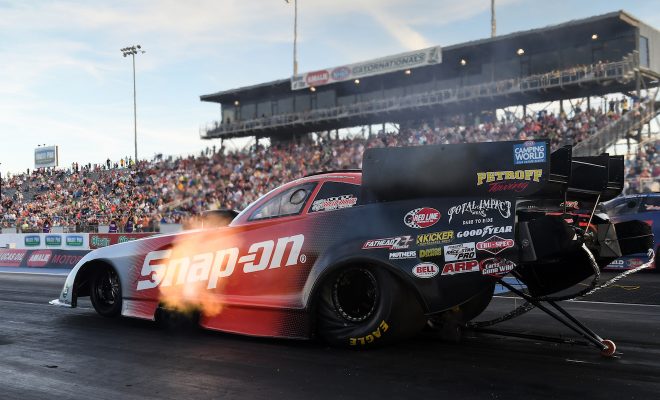 Starting from the top-half of the field at every race this year is the fuel Cruz Pedregon, Crew Chief John Collins (JC) and the team need to keep rolling strong into Epping this weekend. The team is seeing the Snap-on® Dodge® Charger SRT Hellcat make consistent runs, and the break between races afforded time to check and resolve a timing issue and repair the body that scraped the wall in Houston.

“The team is working so hard and you can see it paying off with a 3.94 second run at 323 (mph). We’re going to keep chipping away…going rounds and moving up in the points. With each race, we’re getting better and that feels good,” Pedregon says.

The team is building up its inventory and readying everything for the busiest part of the season, according to Cruz who says of the trip to the Northeast, “Epping’s always a fun race and I’m looking to claim a Wally at a track I have yet to win, so I’d like to punch a ‘W’ there. There aren’t too many races we haven’t won, so this would be one of them. The best is yet to come for us and we’re just getting started.”

The season has already provided the team with more round wins than in the previous full season and a perfect reaction time by Cruz in Charlotte making him the first Funny Car driver to achieve it since 2008. He is one of only four drivers to do so in the last 40 years.