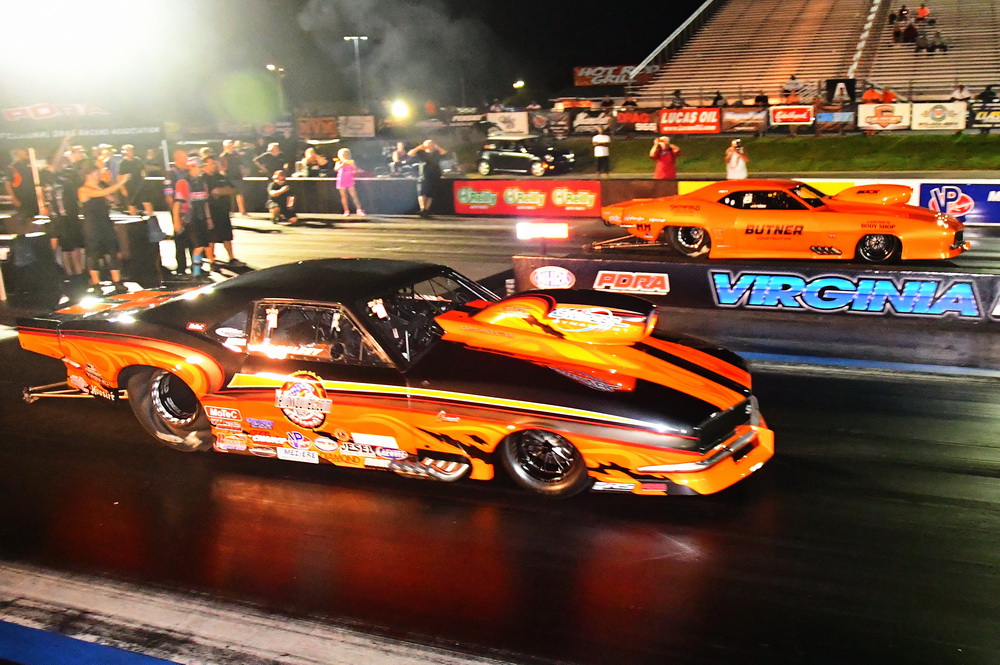 In the Jr. Dragster categories, North Chesterfield, Virginia’s Mallory Logan capitalized on her No. 2 qualifying position by racing to the Coolshirt Pro Jr. Dragster final round, where she used a holeshot advantage to win with an 8.018 to Noah Cornatzer’s 7.967, both on a 7.90 dial-in. Lane Morgan earned the Gilbert Motorsports Top Jr. Dragster win over CJ Jenkins, with Morgan running 9.228 on a 9.04 dial-in and Jenkins breaking out with 9.01 on a 9.02 dial-in.

A year without a Pro Nitrous victory, coupled with a first-round loss at the last race in Darlington, led perennial class favorite Jay Cox to try something different. He called on a group of friends, including chassis builders Rick and Rickie Jones, to help him get out of a rut. With guidance from his friends, Cox and his team made 33 test runs in the month between the Darlington and Virginia races.

“We got a bad car in the heat,” Cox said. “From testing to the final round, this RJ Race car never missed a beat – I believe we’re the only car that went down under power on every attempt. I didn’t show all we had this weekend because we were behind on tuneup stuff, but it’s a fast car. Again, we didn’t abort a run in the heat since Rickie’s been helping me. Rickie and I tested together and he’s helped me a lot, along with Jeff Pierce and Billy Stocklin. They all got me somewhat back on track. I just have to take this and build off of it. I don’t ever claim to be smart, I just work hard. The amount of work we done in the last three weeks testing, to come out here and win for my guys means more to me than anything.” 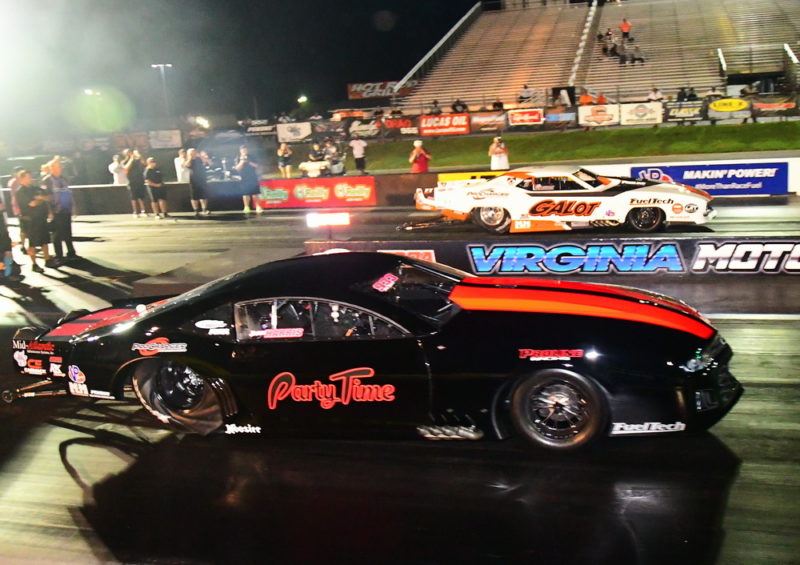 For the third race this year, a GALOT Motorsports entry went to the final round in Pro Boost. Team driver John Strickland beat teammate Kevin Rivenbark in the final round at the last race, the Carolina Showdown. This time, Rivenbark clinched the victory for GALOT team owners Earl and Peggy Wells. Rivenbark’s Steve Petty-tuned, ProCharger-boosted ’69 Camaro recorded a 3.694 at 201.73 to beat Pro Nitrous champion-turned-Pro Boost rookie Jason Harris and his 3.713 at 201.22.

“It would’ve been better if it was John and I [in the finals] again, but sometimes things happen,” said Rivenbark, the 2016 and 2019 world champion. “He’s still in the points lead, though, and I should’ve moved up to second or third. Overall, it’s been a great year so far even with all this COVID mess going on. The few races we have had this year, I think we’ve done well. It’s always great to win for Mr. and Mrs. Wells, and we appreciate them giving us the opportunity to do this.”

Aside from a 3.803 to beat Derek Ward in the first round, Harris was locked in the low 3.70s. He defeated Melanie Salemi in the second round, then moved on when Strickland went red in the semis. 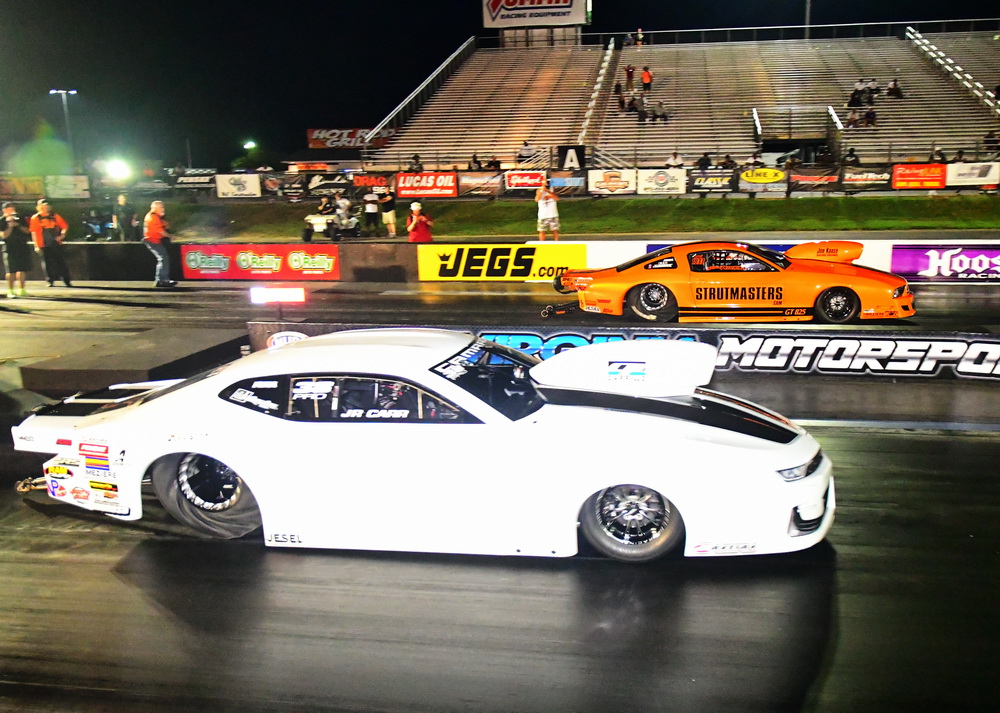 Even with the second-quickest car in qualifying, Johnny Pluchino knew he needed to step up for the Extreme Pro Stock final round against JR Carr, who has two low qualifier awards and an event win since debuting a new car this season. Driving his father John’s Kaase-powered Strutmasters.com ’13 Mustang, Pluchino grabbed a major advantage on the starting line and never looked back as he powered to a 4.079 at 177.14. Carr slowed to a 4.323 at 163.08.

“Me and Dad loaded up and went to GALOT [Motorsports Park] two weeks ago and made a couple runs on a 104-degree racetrack,” Pluchino said. “We bolted Voss wheelie bars on it and tried a couple things to fix it early, make it a little better and it worked. We came out here, didn’t even test, and we were fast. We had a really tough competitor in the final. JR Carr has obviously stepped his game up this year. That’s one hell of a team. We didn’t fold under pressure.”

Pluchino, who earned his first Mountain Motor Pro Stock victory at the season opener, defeated Elijah Morton with a 4.100 at 177.23 in the first round. A consistent 4.099 at 176.65 followed to beat John DeFlorian Jr. in the semis.

Carr in his Frank Gugliotta-tuned ’20 Camaro dispatched Todd Hoerner and Chris Powers en route to the final round. 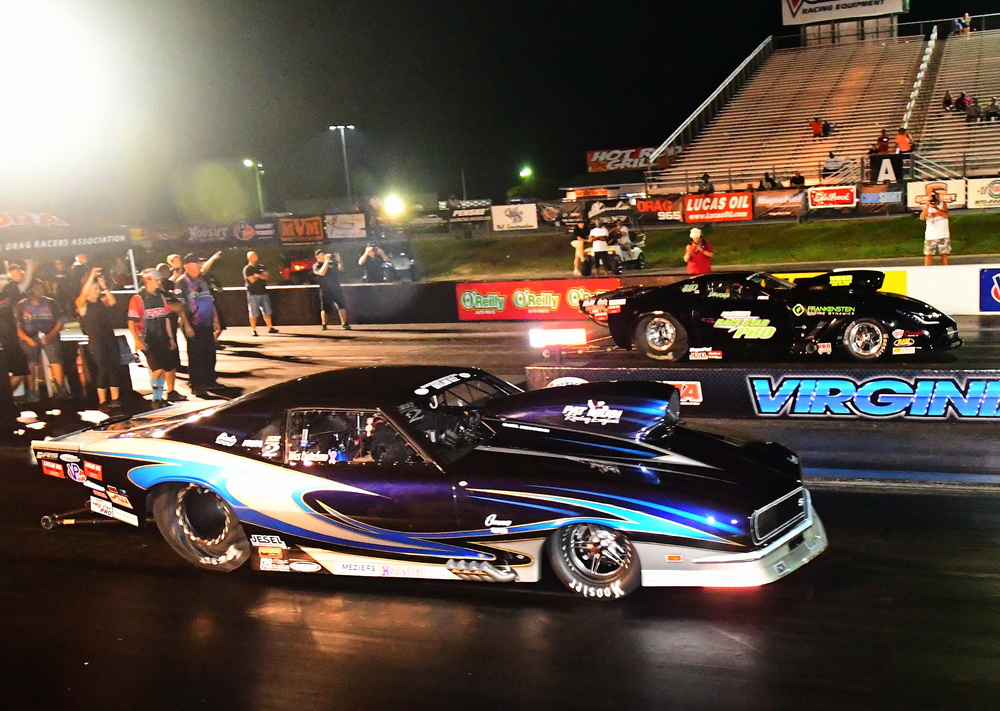 Dillon Voss was down a few small numbers compared to Wes Distefano in the first two rounds of Pro Outlaw 632 competition, but the 2017 world champion pulled out all the stops for the final round against Distefano. Voss in his Voss-powered Race Star Pro Forged Wheels ’17 Corvette drove around Distefano’s holeshot and 4.284 at 170.06 with a 4.259 at 168.47.

“We’ve had a really good car all weekend,” said Voss, who qualified No. 1. “It’s been hard to screw up. Cory’s been working his butt off getting this thing to be consistent. It’s got a wide tuning window right now. We have a good car and really good momentum chasing this championship this year.”

Distefano raced his Musi-powered $hameless Racing ’68 Camaro past Alan O’Brian and Chris Holdorf before the final round. 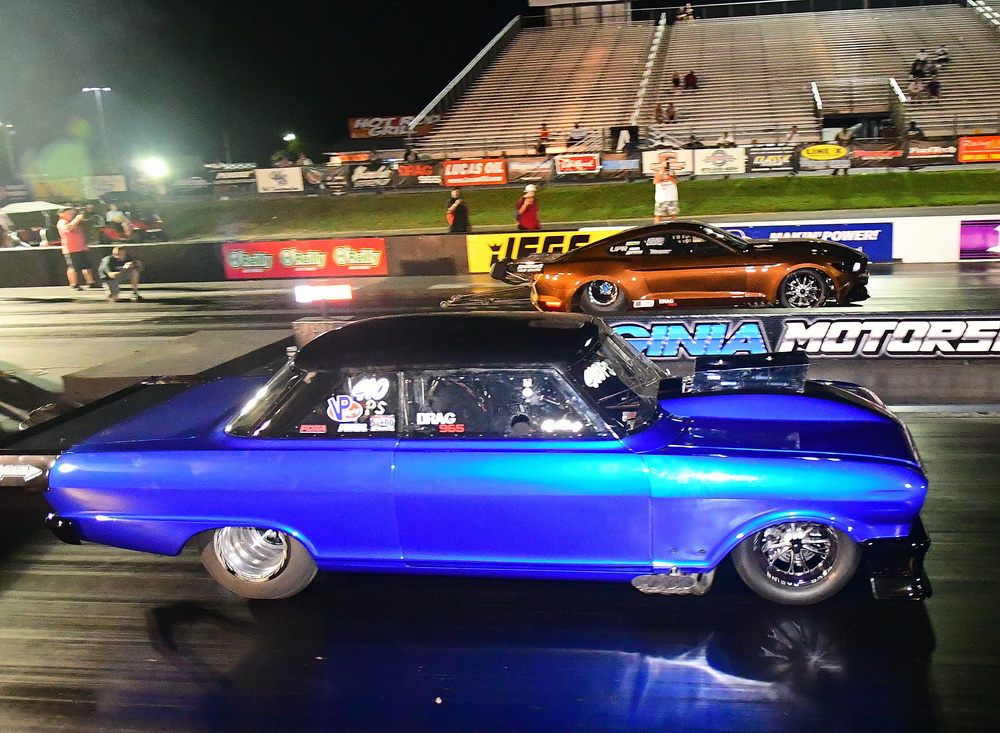 Outlaw 10.5 star Tim Essick missed the first Pro Street event in May, but he made up for it by winning the second-ever PDRA Pro Street race. Driving his home-built, ProCharger-boosted “Brown Sugar” ’18 Mustang, Essick knocked off low qualifier Ron Hamby in the final round. Essick left first and ran a 4.797 at 172.89, while Hamby slowed to a 9.331 at 45.83.

“This is the first time in the Pro Street stuff, so to go home with a win is just unbelievable,” Essick said. “It’s a great group of people and we love racing with the PDRA. They’re so welcoming and make you feel like family. Anything we can do to support them, we want to do that.”

Hamby defeated Charlie Cooper in the first round and had a single in the semifinals. 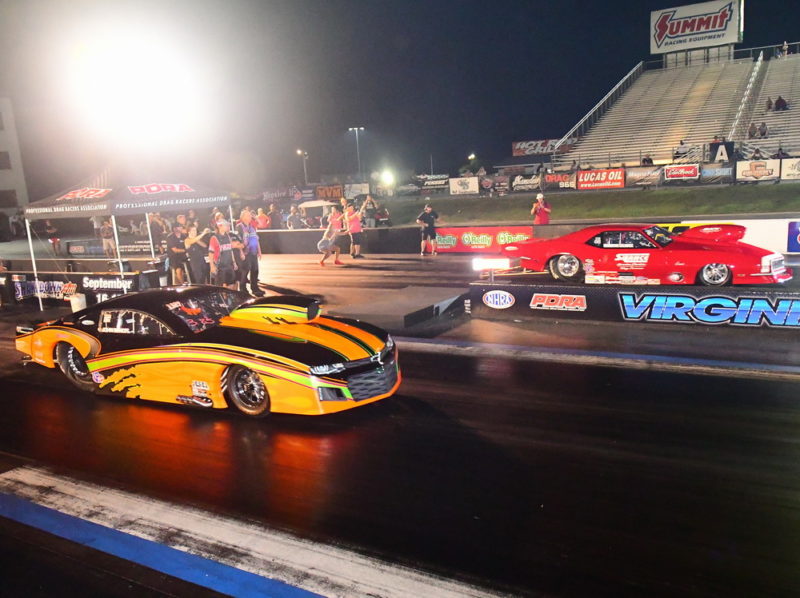 Elite Top Sportsman low qualifier John Benoit carried over his quick performance from Friday qualifying into consistent performance Saturday. In a battle of Buck-powered Camaros, Benoit ran a 3.888 on a 3.85 dial-in in his ’17 model next to Dewayne Silance’s 4.148 on a 4.05 dial in his ’68 model to deny Silance his second consecutive event win. 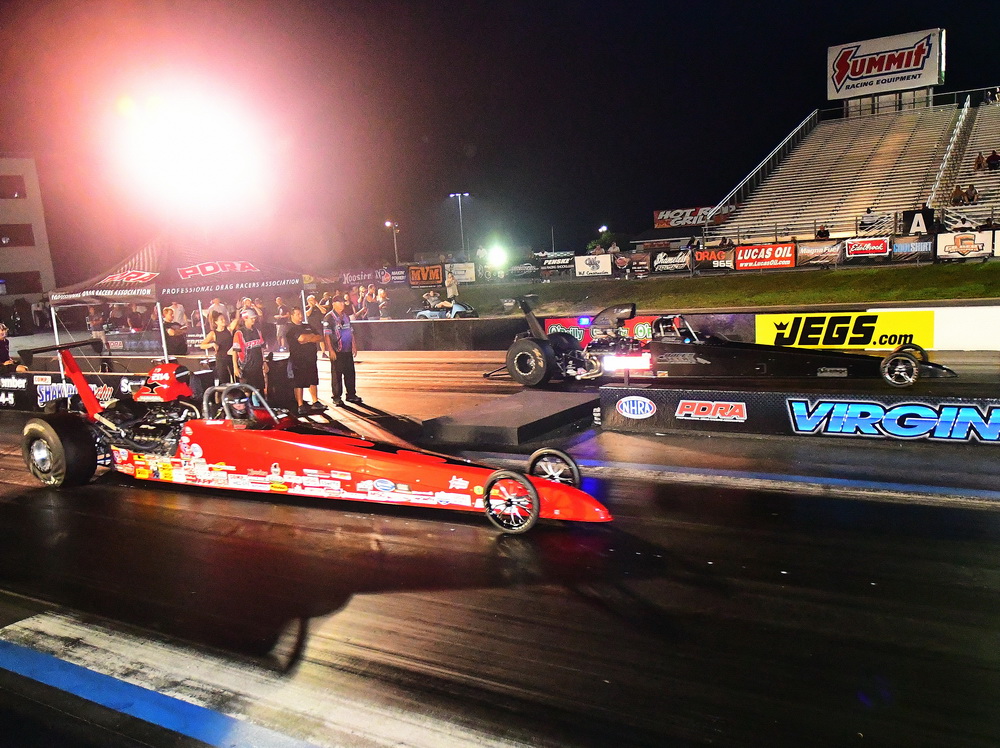 Even Elite Top Dragster defending world champion Kellan Farmer couldn’t stop Steve Furr on his undefeated run, which extended to three consecutive event victories after Farmer went red to Furr in the final round. Furr in his centrifugally supercharged American dragster broke out with a 3.912 on a 3.92, but Farmer’s red light negated his 3.994 on a 3.99 dial in his nitrous-assisted Racetech dragster.

Rikki Molnar and Jack Trussell squared off in their pair of 632ci-powered dragsters to race for the Top Dragster 48 event title. Molnar had the starting-line advantage and recorded a 4.486 on 4.46 dial to Trussell’s 4.492 on a 4.48 dial.

The next race on the adjusted 2020 PDRA tour is the Northern Nationals, Aug. 20-22 at Maple Grove Raceway near Reading, Pa.